“Mobile first” is coming to YouTube. Today 40 per cent of YouTube traffic comes from mobile devices, Larry Page, CEO Google, said this week in his earnings call when Google presented the results of third quarter 2013.

The shift to mobile is tremendous. Compared to 40 per cent today it was just 6 per cent 2011, Larry Page declared.

Investors have already noticed the shift and they are closely following the new signs. One of the trends they are watching is how the revenues from advertisements are affected by mobile first. 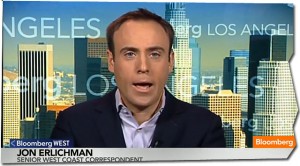 Jon Erlichman, reporter on Bloomberg TV, says for example that Google has to move its advertisement business from the PC’s into the market of the mobile devices. They can’t ignore the shift of the YouTube traffic, a shift they can see that the whole Internet is going through.

Google has to catch up with this massive transformation, says Erlichman. And maybe the company is on the right way. The recent positive results for Google on the stock market could be a sign that the investors have a positive view on the company.

This week the Google shares has made a tremendous leap from about $880 a share up to as high as $1,007. It could be a sign that the traders on the stock market is understanding that the transformation to “mobile first“ have deep implication on business.

Those who follow trends has seen this change for a couple of years. The media is shifting to mobile first, even local papers as for example Västerbottens Kuriren in the north of Sweden, is transforming from paper print to tablets and mobile devices.

And when the department of Computing Science at Umeå University announces summer courses in app developing for iOS and Android mobile phones there is a huge pressure on student applications.

So “mobile first” is coming to town. And the one who wants to be a part of the IT industry has to step up in line for that call.

More on this subject:

Listen to Jon Erlichman: Google Clicks: A Window Into Google’s Mobile Money And Have Investors Left Google for Apple?

Mikael
View all posts by Mikael →