By 2015 there will be 900.000 digital jobs waiting to be filled in Europe. Many companies will be struggling to recruit the IT specialists they need. This is already a fact today for several businesses.

The lack of IT-skilled people was one of the main topics discussed when the European Council met 24-25 October 2013. As a remark President José Manuel Barroso said after the first session: “… let’s be frank, Europe has lost ground to key competitors. We are simply not using the full opportunities offered by the digital economy”. 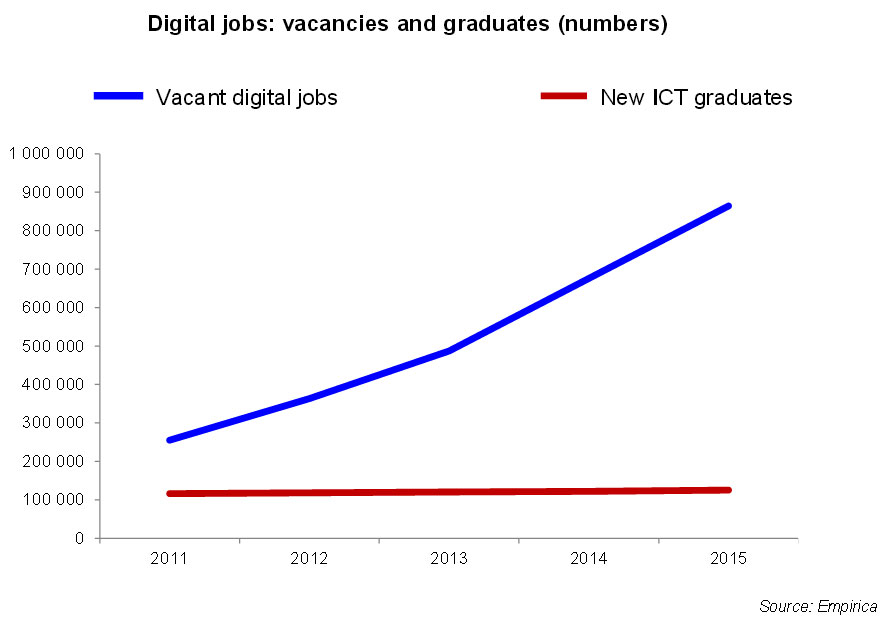 Picture above from the presentation Innovating in the digital era: putting Europe ack on track by J. M. Barroso at the European Council 24-25 October 2013.

During the session it was stated that Eorope has a great need for more skilled people in the ICT industry. That is one of the most urgent actions for Europe today. The European Council therefor decided that more structural funds will go to digital training and education: “part of the European Structural and Investment Funds (2014-2020) should be used for ICT education, support for retraining, and vocational education and training in ICT”.

The statement from the European Council on the digital economy is important. However, many initiatives can also be taken at a local level. In Sweden, the city of Umeå, which will be the European Capital of Culture 2014, the ICT companies and the University has made several concrete efforts to manage the obstacles of an upcoming lack of skilled people.

One example is the engineering program in Computing Science at Umeå University that will conduct a pilot project with group mentoring. The students will have mentors from the ICT industry during virtually the entire period of their education that is for five years.

The objective is having students and businesses to get to know each other so that the students may gain insight into the industry standard for coding, development and problem solving.

Student groups will meet mentors 3-4 times during a semester.  The mentors will act as a sounding board and guide the students to a professional attitude. The project is student initiated and will largely be managed by the students.

The mentor groups at Umeå University are one of many examples of initiatives to strengthen the digital economy. As it is declared in the document named Europe’s digital challenge: “The digital economy can help European industry to grow, provide infrastructures for tomorrow’s companies and boost growth of new start-ups”. (In Contribution from the Commission to the October 2013 European Council Debate on the digital economy.)

But without skilled people in the ICT industry the growth will be hard to achieve. So the example of Umeå is important as a role model for building a stronger digital industry in Europe.

Mikael
View all posts by Mikael →